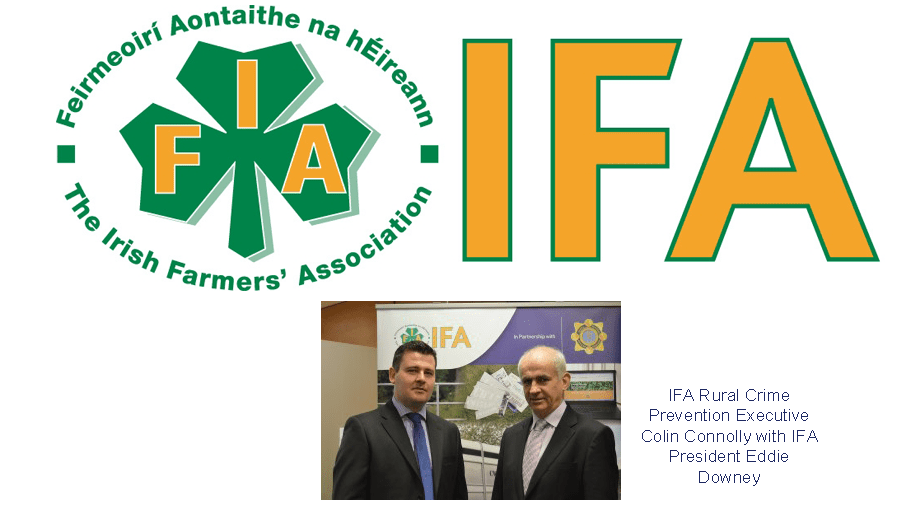 THE IFA has appointed a Rural Crime Prevention Executive to support the development of IFA crime prevention policy and the roll out of Theft Stop, a joint initiative with An Garda Siochana.

The appointment, which is the first of its kind in Ireland, is a very clear demonstration of IFA’s commitment to tackling the issue of rural crime.

Colin Connolly is a native of County Kildare and former member of An Garda Siochana, with more than 11 years’ experience in crime investigation and crime prevention techniques.

Colin will work closely with An Garda Siochana on the development of a range of crime prevention initiatives, including the national roll out of Theft Stop through the IFA’s 946 Branch network and the wider rural community.

Theft Stop is a practical, simple, cost-effective theft prevention initiative. Following a successful pilot in Tipperary and Donegal, the initiative is being rolled out nationwide on a county-by-county basis. Theft Stop is designed to both deter criminals and to recover stolen items by ensuring machinery is clearly marked with a unique ID and that details are registered on Theft Stop’s nationwide database.

The recent increase in the theft of agricultural equipment is of huge concern to IFA, says President Eddie Downey, “The loss of equipment or livestock can be financially devastating for farmers, who like all rural dwellers are very vulnerable. It is for this reason that IFA has partnered with An Garda Síochána to develop the Theft Stop crime prevention initiative. I would encourage all country dwellers, and farmers in particular, to become part of the initiative by registering today”.

Assistant Commissioner Jack Nolan commented “Theft Stop is another excellent example of effective crime prevention in partnership. Working in tandem with established prevention methods, it will be an invaluable resource in the fight against rural crime.”

Christy Doherty FBD Commented that “The Proposal is a practical and cost effective idea, that may well result in thieves thinking twice about engaging in their pursuits and will certainly assist Gardaí and others in identifying stolen goods after the event.”