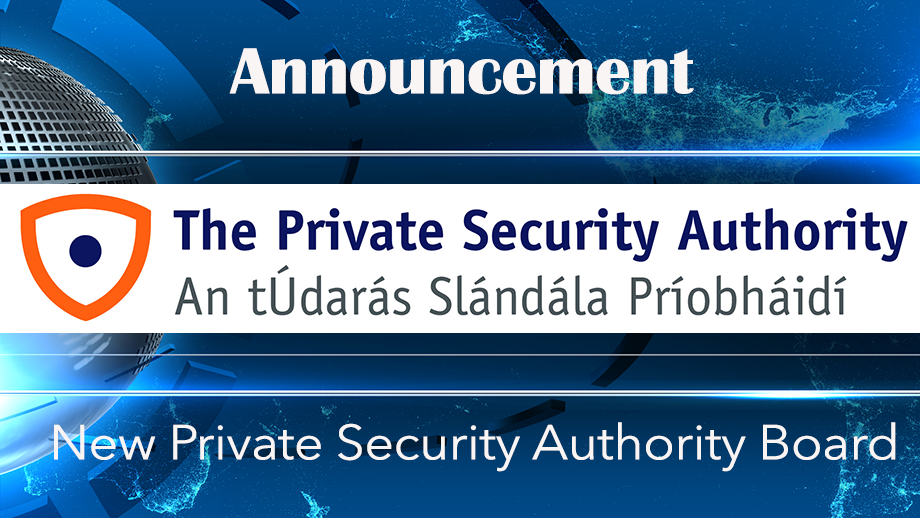 Minister for Justice, Helen McEntee T.D., has appointed a Chairperson and ten ordinary members to the Board of the Private Security Authority (PSA).

The new Board members are formed in accordance with the Private Securities Services Act, 2004 and include four members who have been appointed following completion of a Public Appointment Service recruitment competition.

While four of the members are being reappointed, including the new Chairperson of the Board, Mr Richard O’Farrell, who previously served on the Board as an ordinary member since November 2017.

Announcing the new Board, Minister McEntee said, “The Private Security Authority performs a very important role regulating those involved in providing security services and protecting consumers. I am delighted to announce such high calibre and experienced members to the Board today. I am sure their experience and professionalism will be a great asset to the Authority in undertaking its very valuable work.

I think that it is important to note that these reappointments will ensure continuation of organisational knowledge. Those being reappointed, along with their new colleagues, will bring considerable skill and expertise to the work of the Authority.

I am also delighted to be able to appoint an increased number of qualified and skilled women to the Board, bringing us closer to achieving the Governments goal of female representation of 40%. I believe that this is particularly significant given the work of the Authority when we know that sometimes female experiences of the areas governed by the Authority can be very different to those of men.”

The Minister also thanked the outgoing Board for their commitment and service,

“I also wish to take this opportunity to thank the members of the outgoing Board for their work. Through their dedication and hard effort they have ensured the continued development of a professional and well regulated security industry in what I know have been very challenging times over the last two years.

It is true that good regulation builds public confidence in the industry and helps create new opportunities for those operating in the sector, and I would like to commend them for continually striving to achieve these goals.”

Details of the new Board are available here