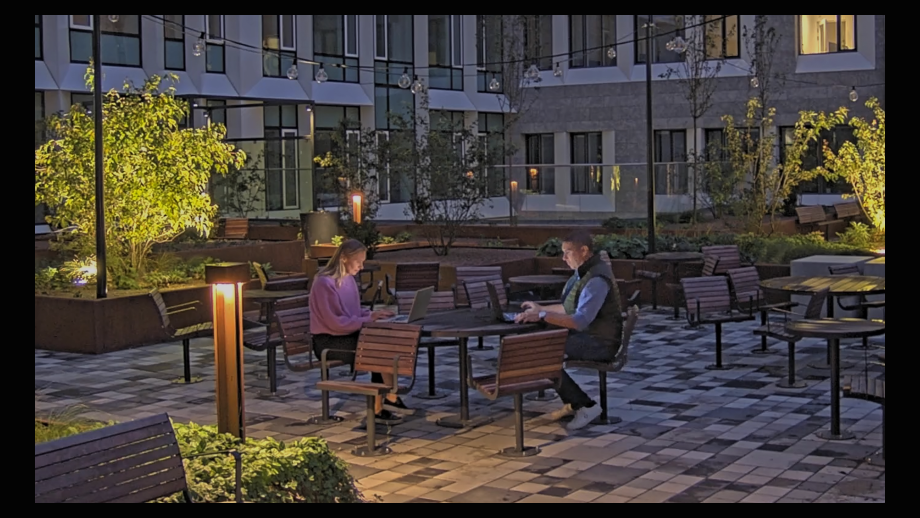 It wasn’t long ago when capturing low-light recordings of videos with forensic details was a very difficult task, requiring additional lighting to get a usable result. Ultimately, the images are supposed to identify potential intruders, which means things like facial details or the color of vehicles need to be visible in low-light conditions. Axis Lightfinder technology is one of the few solutions that can provide the latter – and it has grown-up and is constantly evolving. Some of these adjustments and developments have been introduced with Lightfinder 2.0.

Evolutionary sight in the dark

The ability of humans to see in the dark is limited – especially when it comes to colors and details. Millions of years of refinements have enabled us to use the information that’s sent by our eyes to our brain and interpret night scenes for our best survival and usability. But we don’t have any possibility to improve the image and when incidents have occurred in the past, interviewed eyewitnesses often can’t describe events or details correctly. Which is where technology like AXIS Lightfinder in surveillance cameras become a useful addition to security staff – especially in low-light environments.

Overall, Lightfinder technology is a combination of extremely light-sensitive sensors with carefully tuned image processing algorithms. Together with a high-quality lens, this technology allows for sharp images in low-light conditions that still contain life-like colors. Given that dusk and generally poorly lit areas are preferred by potential intruders, it’s important to be able to see the details that might help later with the identification, be that the color of a car or the details of worn clothing.

The algorithms in surveillance cameras are responsible for recovering the colors, removing the noise and, ultimately, creating a clear picture. They help significantly to turn even the smallest sensor signal into usable video footage. However, it’s essential that these surveillance algorithms act in a predictable way, and never add foreign information into the image in an effort to make it more appealing to the eye. Preserving the original image content and its forensic details must always be a priority over extensive filtering.

Lightfinder 2.0 builds upon these advanced features and all the experience from the original version of Lightfinder. It contributes to the goal of being able to monitor an area 24/7 under any condition and with the highest possible quality. Which is why the updated version of Lightfinder has an increased light-sensitivity and other features that make images clearer and more colorful.

Importance of photons and noise reduction

To understand how the new features work, it’s helpful to take a step back: Light-sensitivity is really the ability to detect minor changes in contrast even under difficult conditions. For this reason, it is essential to capture all of the very few photons that arrive at the image sensor to avoid them scattering on the glass-surface or the sensor: photons that are lost before converted into electrons in the pixel can never be recovered. Image-signals captured under these conditions are often submerged in noise, which requires a significant amount of noise reduction and signal recondition. This also needs to be done without destroying critical temporal- or spatial-information or introducing other unwanted artifacts.

The new, advanced version includes sliders to adjust the amount of noise reduction that is applied to the video. This is essential as some analytics applications are quite sensitive to noise reductions. So based on their needs an advanced system integrator can now optimize accuracy, by adjusting the noise level or the analytics can take care of this. While a number of analytics perform well with one level of noise, others need to maximize the noise reduction to avoid false alarms. It also enables adjustment of the performance of the camera to its environment as scenarios in which a camera is mounted can vary – be that light or other factors. Which is why Lightfinder 2.0 makes it possible to adapt to the spatial noise filter (SNF) and temporal noise filter (TNF). Ultimately, this adjustment leads to more customized image processing.

As mentioned, Lightfinder 2.0. captures images with even more life-like colors and more clarity, two factors that are to a certain extent connected. Most modern image-sensors use the so-called Bayer-filter array to create a color image. This filter pattern, which is placed on each 2×2 group of photosensors, groups pixels into three categories: 50 per cent green, 25 per cent respectively red and blue. The reason for this split is that green allows the human eye best to see brightness or contrast. For cameras it means that blue or red objects only receive half the signal compared to a green one, which makes them noisier. That’s where the white balance algorithm can optimize the signal-to-noise-ratio and reduce the noise level.

Motion-adaptive exposure significantly reduces the motion blur from approaching or nearby objects by measuring speed and adjusting the exposure time accordingly. If a security operator pauses the video, the visible frame would still show an image that’s clear and detailed enough, so that the situation can be assessed: for example, being able to identify a person or a vehicle, prompting appropriate action or tracking an individual.

Not every Lightfinder is the same

Naturally it is important to select the right camera type for specific premises as they’re optimized for different tasks. While most of the cameras have Lightfinder implemented doesn’t mean all have the same level of light-sensitivity – they benefit differently from the feature. For example, long-zoom PTZ cameras are perfect to quickly change view from a nearby door to a facility hundreds of meters away but they come with a lower light-sensitivity. On the other side there are fixed box cameras that usually contain image-sensors with larger pixels, which converts directly into a better contrast detection.

Comparing with other low-light technologies

Of course, Lightfinder is not the only way to capture images in low-light conditions or near darkness. What makes it outstanding is the capability to capture true colors, something that differentiates this solution from other technologies, such as cameras with infrared radiation (IR) or thermal imaging. While both of these options are valid for certain areas, they don’t provide footage with color information, which can make identification difficult. Plus, thermal cameras won’t capture any details that allow reliable identification, and IR cameras are dependent on LEDs in order to provide clear images at night. Which is why a system that combines both Lightfinder 2.0. technology and, for example, thermal cameras can be a great option for some areas. Thermal cameras deliver images that allow analytics to reliably detect motion, while Lightfinder delivers the color information and the possibility to identify and investigate suspicious activity.

Lightfinder 2.0. has not only taken on learnings from the first generation but the advanced technologies will make it possible to get even more detailed images and results, helping people and companies to stay safe and secure. Plus, it’s only the start of bringing ‘old’ technologies to the next level with the evolution of hardware and software.

Learn more about the additional features of Lightfinder 2.0