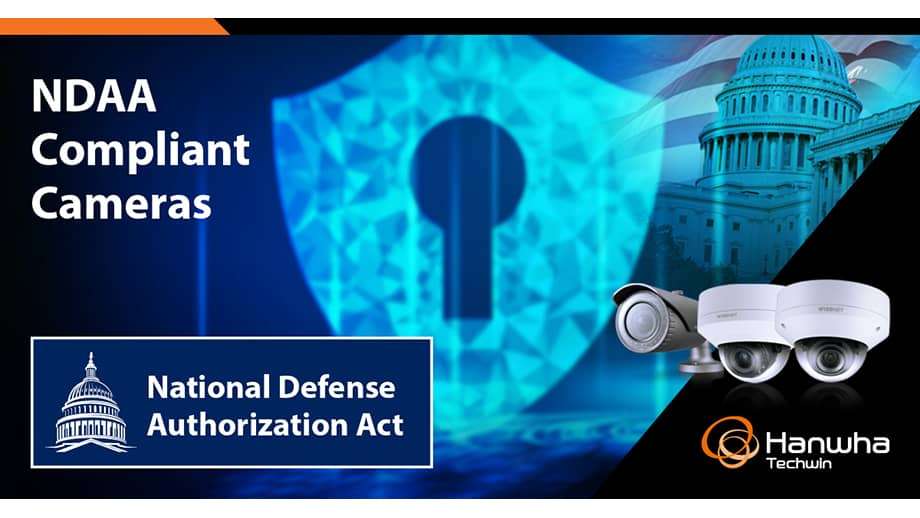 The importance of NDAA compliance for European businesses

Uri Guterman, Head of Product & Marketing for Hanwha Techwin Europe, explains the significance of the measures taken by the U.S. Government to prevent security cameras being maliciously hacked.

There are many acronyms which are regularly used on websites and in documentation to describe the attributes of video surveillance products, but there is perhaps currently none more important than NDAA.

NDAA is the acronym for the John S. McCain National Defense Authorization Act. Compliance with the Act and in particular Section 889, is an essential requirement which consultants, system designers and system integrators will need to take into consideration when submitting tenders for projects involving clients who operate in the US.

Section 889 prohibits U.S. federal agencies and their contractors, as well as grant or loan recipients, from procuring or using telecommunications and video surveillance equipment from a number of named companies. It applies to a substantial or essential component of any system, or as critical technology as part of any system.

In simple terms, this means federal agencies are prevented from deploying cameras manufactured by any of the blacklisted companies.

Fortunately, with there being no shortage of non-blacklisted manufacturers offering professional level video surveillance solutions, stakeholders can take advantage of a highly competitive marketplace to procure cameras that are cost-effective, as well as NDAA compliant.

With its headquarters and manufacturing facilities in South Korea as well as in Vietnam, Hanwha Techwin has introduced a long list of products which are NDAA compliant and has been able to prove that none of its products include components manufactured by any of the blacklisted companies.

Although other Wisenet cameras are NDAA compliant, Hanwha Techwin is particularly proud of the cybersecurity credentials of its ground-breaking Wisenet7 chipset, which includes a host of features such as Secure Boot Verification, Secure OS and Anti-Hardware Clone. This has made it relatively easy to verify that cameras equipped with Wisenet7 are able to comply with the Act by preventing hackers from accessing and tampering with their firmware.

With Wisenet cameras equipped with the Wisenet7 chipset meeting Secure by Default, as well as UL CAP standards, end-users can be assured that in addition to NDAA compliance, the cameras will also help them comply with GDPR by ensuring confidential data cannot be accessed, copied or tampered with.

Do you have some questions about NDAA or cyber security in general? Email Uri Guterman at u.guterman@hanwha.com