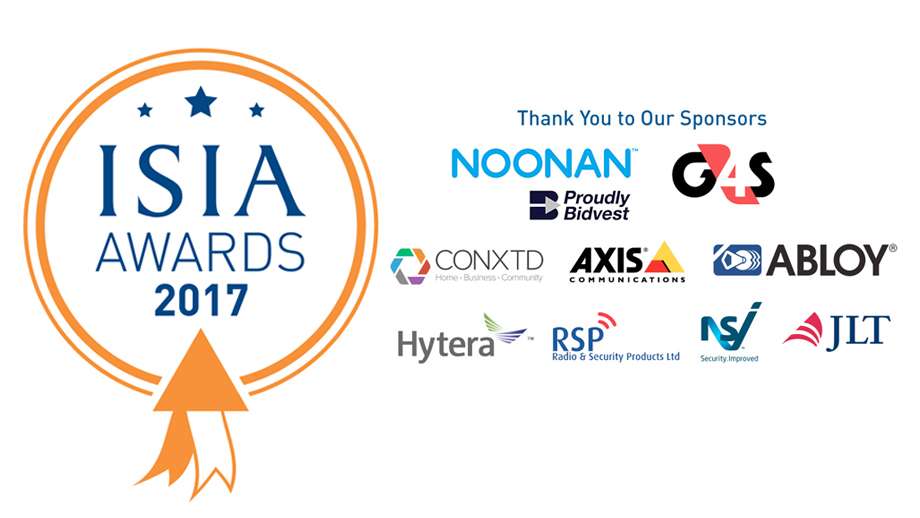 The ISIA Awards 2017 were held on the 25th November at Powerscourt Hotel and was attended by over 260 guests from the private security industry.  Also in attendance were representatives of the Private Security Authority, An Garda Síochána, CHC Helicopters and clients of the industry.

Michael McQuillan, ISIA president, said the awards provided the association with an opportunity to celebrate the outstanding performance of individuals in the industry; the investment in innovation by members; and their focus on delivering an excellent service to clients.

The annual event, McQuillan said, also offered the opportunity to recognise those who contribute to the safety and security of the island of Ireland and whose efforts, bravery and ultimate sacrifice are made for the greater good.

The Security Officer of the Year award, chosen from seven finalists, was announced as Kevin Curtis from G4S.  The judges said this was a particularly competitive year, with intense competition for interview places. 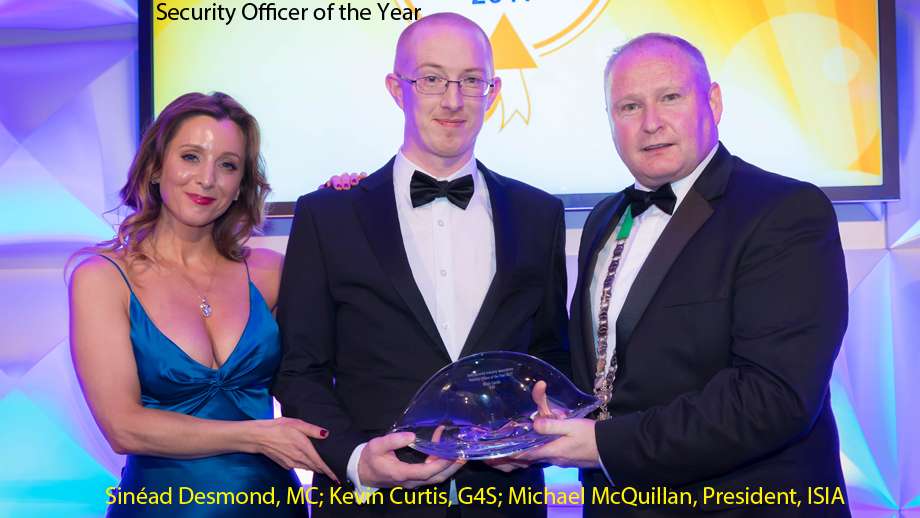 The accolade for Security Supervisor of the Year was presented to Imran Anwar from NOONAN. The gathering heard that all four finalists demonstrated excellent leadership skills and it was evident that they performed to an extremely high standard, often in challenging environments. 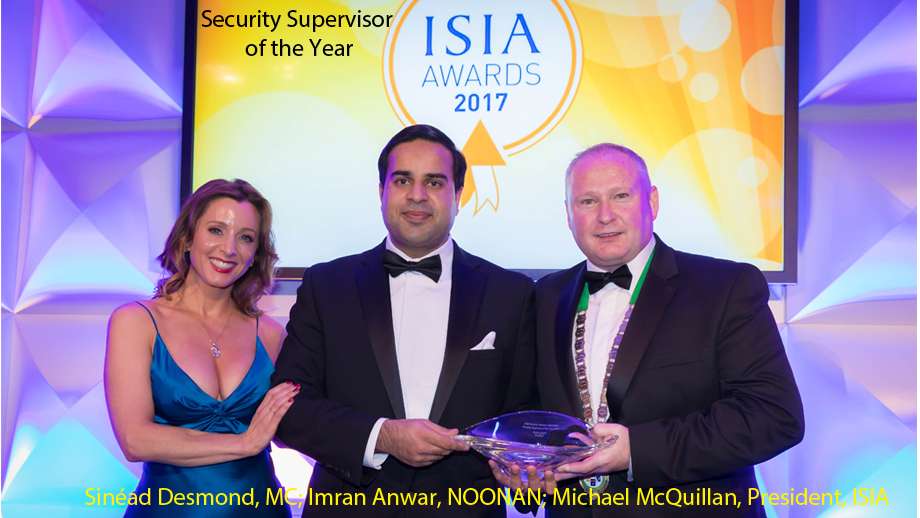 The Event Security Person of the Year, presented by sponsors Mick McGuirk from RSP and Eoin Foy from Hytera, went to Kevin McKenna from Pulse Security Management. There were three finalists in the category. 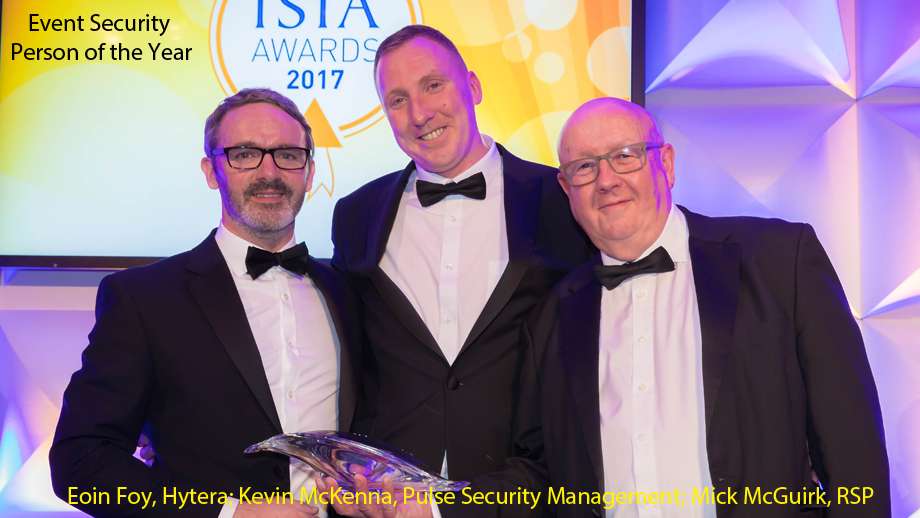 The ISIA Locksmith of the Year, sponsored by Abloy, had two finalists, with the winner emerging as Williams Locksmiths. The award was received by Les Williams.

The finalists were: Crothers Security and Williams Locksmiths. 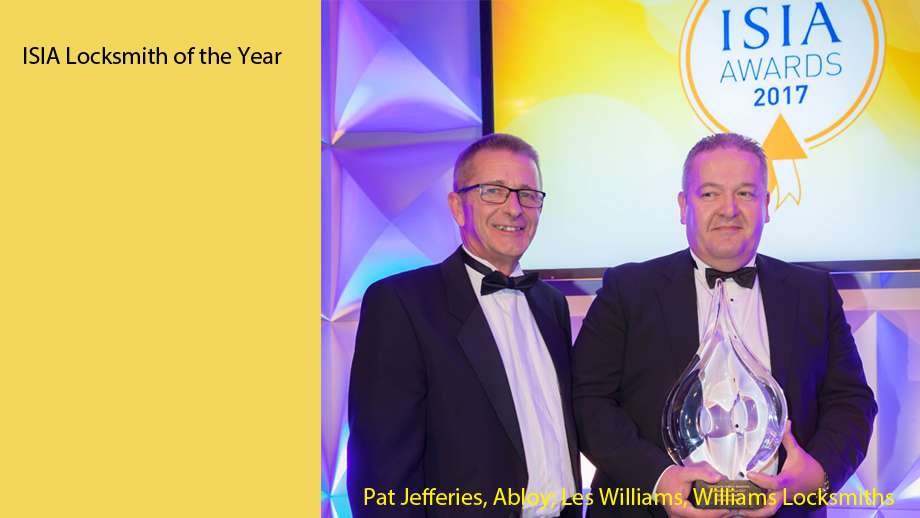 The standard in this category was very high, the gathering heard, with all candidates sharing a passion for technical security solutions; a commitment to clients and a clear understanding of the importance of their service to the success of their contracts. The judges said they expected to see a few finalists return as finalists in the electronic security supervisor category. 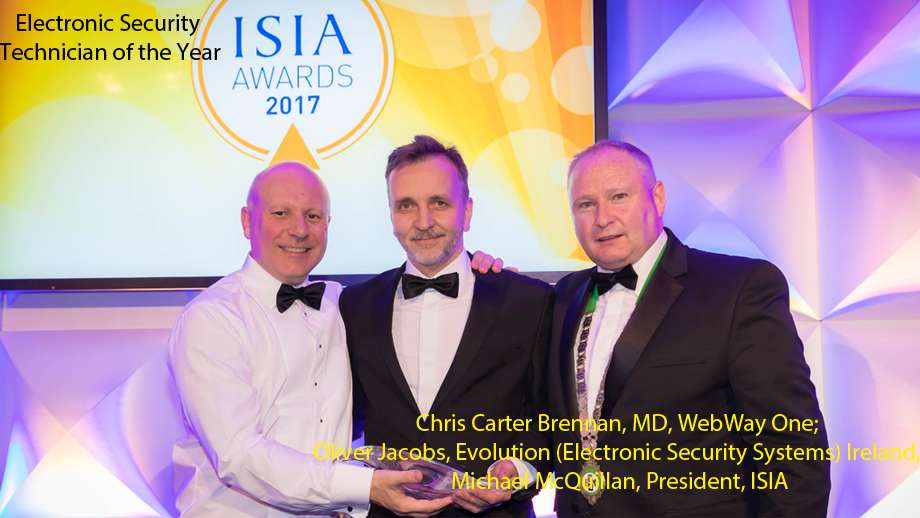 The winner of this year’s Electronic Security Supervisor of the Year was announced as Stephen Hart from TDS. There were four finalists in the category.

The finalists in this category were: Claire Farrell from Evolution Ireland; Daniel Gray from MTS Security; Stephen Hart from TDS and Stephen Lawlor from Action24. 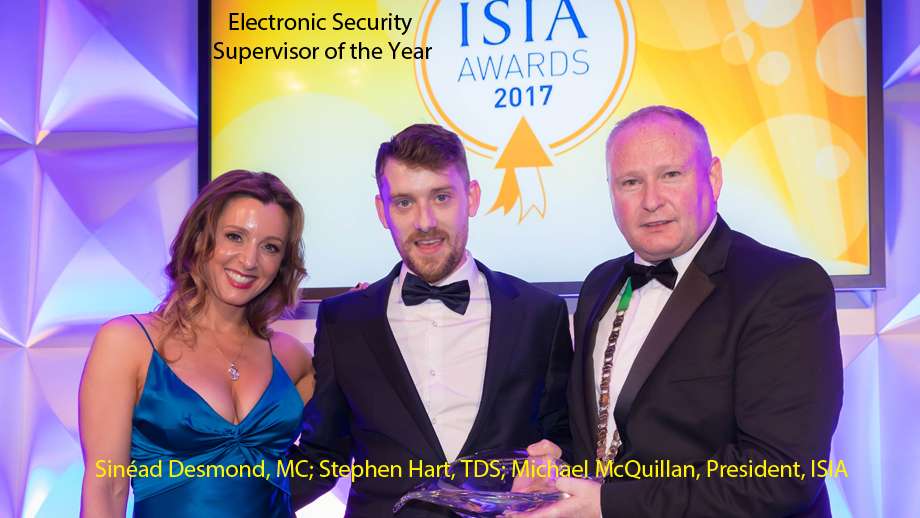 The CIT Client Service Award went to G4S Cash Solutions. The inaugural award provided the ISIA with an opportunity to recognise the standards of cash-in- transit providers. Submissions were based on evidence of client focus; planning and organisation; excellence of people; and innovation and added value, with a supporting client statement. There were three finalists.

The Finalists selected by the judges were: G4S Cash Solutions; GSLS and Treanor Security Systems. 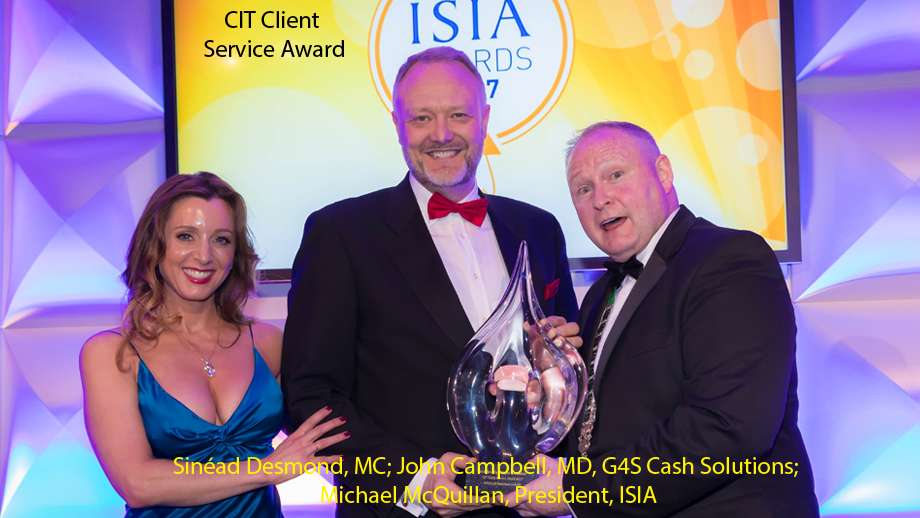 The ISIA plans to shine a spotlight on women working in the security industry by introducing an award category that celebrates the success of women in the industry, and encourages other women to follow in their footsteps. The gathering was told that Siobhan Plunkett of GSLS was an appropriate trailblazer. Having worked in the private security industry for over 25 years, she was cited as an exceptional example for women in business and in the industry.

The founder of GSLS, a significant player in the Irish cash-in-transit industry earlier this year won the category of ‘manager’ as part of the Women in Security Awards in the UK. The ISIA Industry Contribution Award was accepted on her behalf by the ISIA’s first female president, Sheenagh McCullagh. 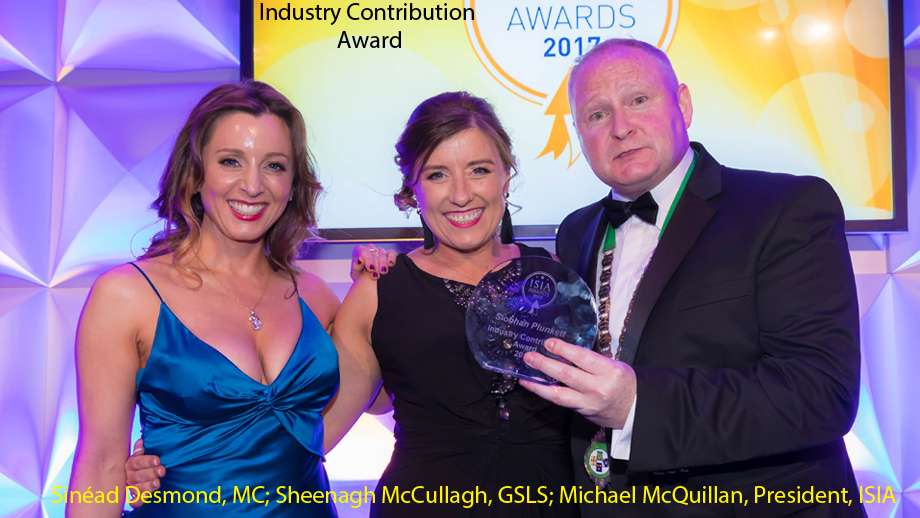 The Qualsec silver award – the ISIA’s quality scheme which allows members to demonstrate standards that stretch beyond regulatory requirements – was presented to Ivan Nolan, managing director, Sharp Group, a new member of the association. 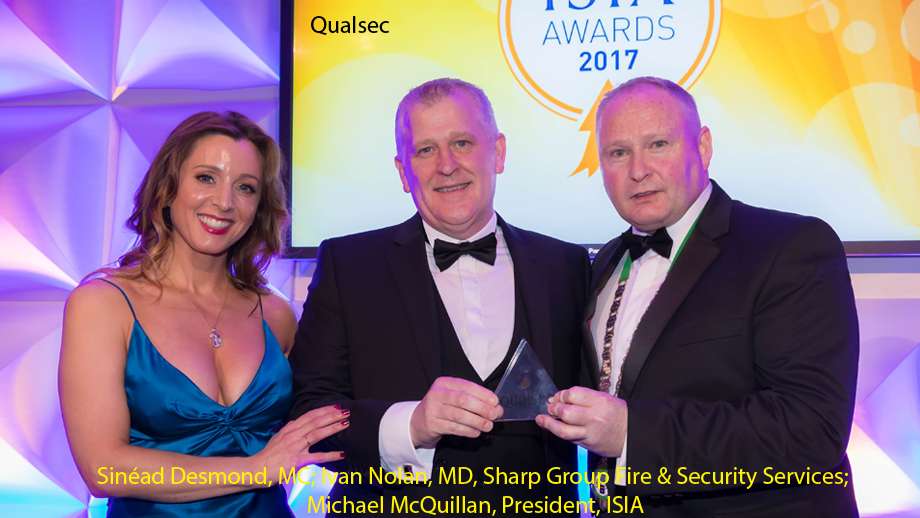 Peter Dempsey from Axis Communications presented the accolade for innovation in security to Daniel Braden-Astbury of Stanley Security Ireland.  There were four finalists in the category which were described as examples of companies with true cultures of innovation. 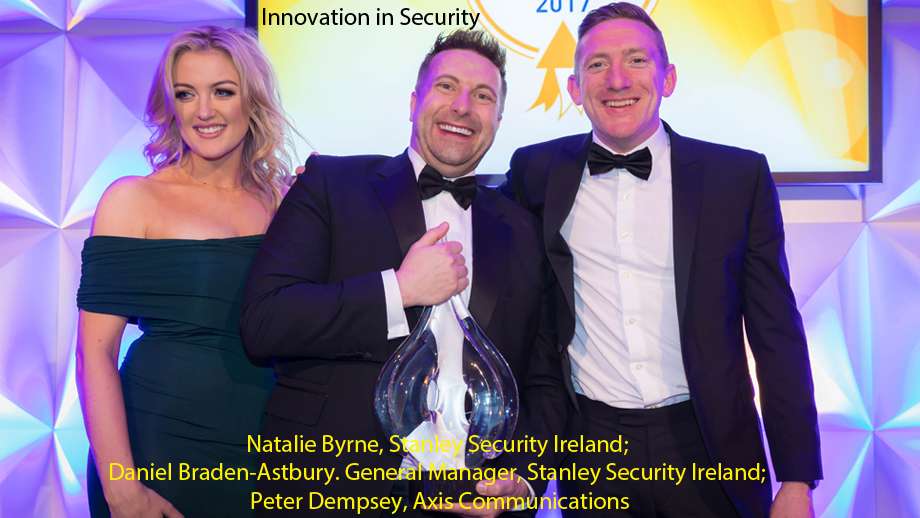 The ISIA Courage Award was presented by Alan Durnan, managing director of G4S Secure Solutions to Eoin Murphy of CHC Ireland, in honour of the crew of Rescue 116. The tragic loss of life of the four individuals involved in the rescue mission last March reminded everyone all too clearly of all those who serve to protect safety, security and lives.  “It was a privilege to sponsor the courage award and to present it in honour of such incredible individuals to whom we owe so much”, stated Alan Durnan, MD, G4S Secure Solutions. 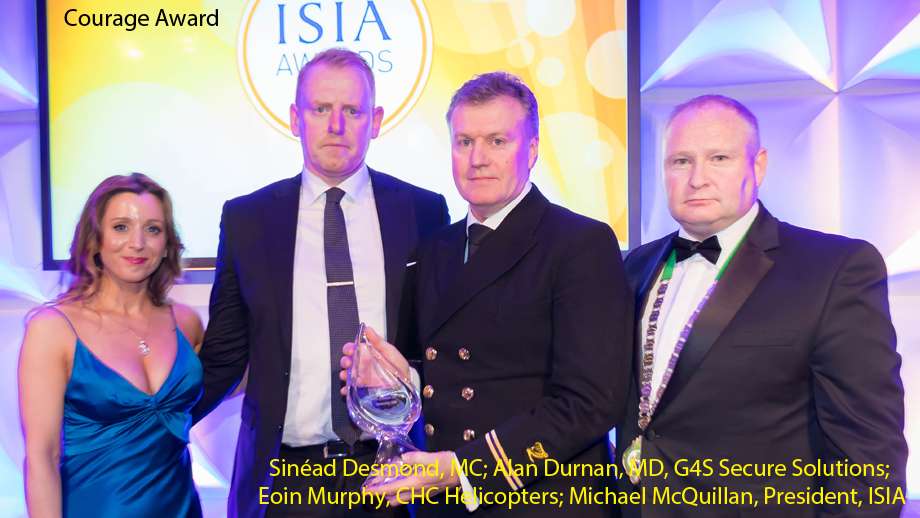