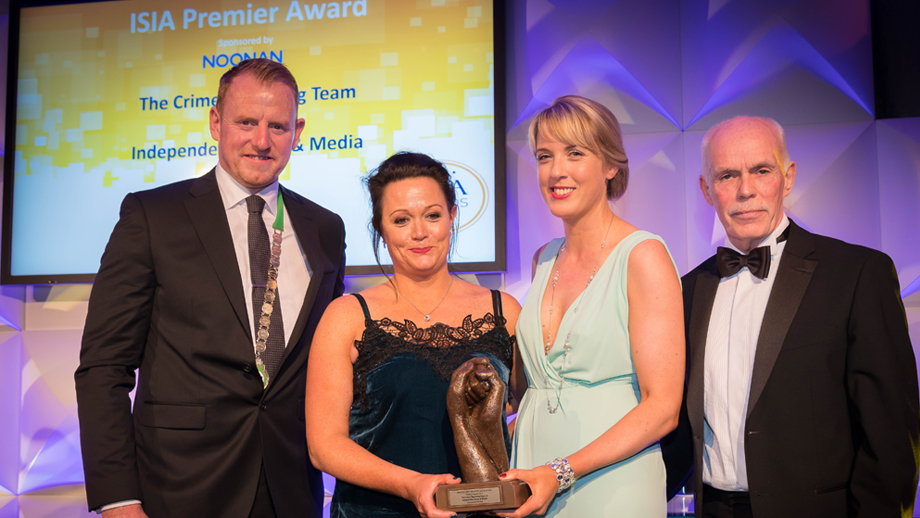 The ISIA Awards was held in November 2016 at Powerscourt Hotel.  The event was attended by 200 guests from the private security industry and senior management from a variety of sectors.  Also in attendance were members of the Private Security Authority, An Garda Síochána along with individuals whose bravery and courage make a true difference to our lives.

As pointed out by ISIA President, Alan Durnan, “the ISIA awards ceremony is a very special occasion that provides an opportunity to recognise and celebrate the achievements of members and those who contribute to their success and standards each day.  It is also a platform for the recognition of the efforts of individuals and groups outside the industry who have contributed in different ways to making this island a more secure place and who have shaped the society we live in today.”

The Premier Award, sponsored by Noonan, was presented to the Crime Team of Independent News and Media.  The journalists of the crime team put themselves at great personal risk each day to report on criminality in our society.  The ISIA wished to recognise the contribution that their work makes towards shaping our society’s view of criminality, and in doing so ensures that we all work towards a more secure island of Ireland with reduced crime.

The ISIA Premier Award, Paul Lynch Memorial Trophy, is presented each year to an individual or group whose work has contributed to improving the safety and security of the people of Ireland.  The award was accepted on behalf of Independent News and Media by Nicola Tallant and Jane Last. 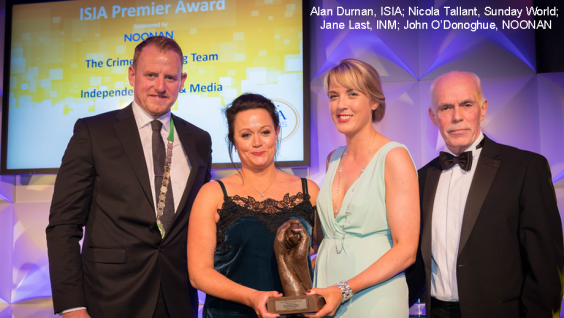 This year’s Courage Award, sponsored by G4S, was presented in honour of the Men and Women of 1916 who fought for Irish Freedom.  The ISIA was delighted to have representatives of the 1916 Relatives Association in attendance to accept the award.  “When we reflect on the rising we come to realise how much we owe to the bravery and courage of the men and women who took part”, stated Alan Durnan, President of the ISIA and MD of G4S, this year’s sponsor.  The award was accepted by Maria and Alex Fitzpatrick, Grand Niece and Great Grand Niece of Nurse Elizabeth O’Farrell, who remained in the GPO until the end of the Rising and delivered the surrender to the British military.  The ISIA was honored to have the Fitzpatrick family members there to represent the 1916 Relatives Association. 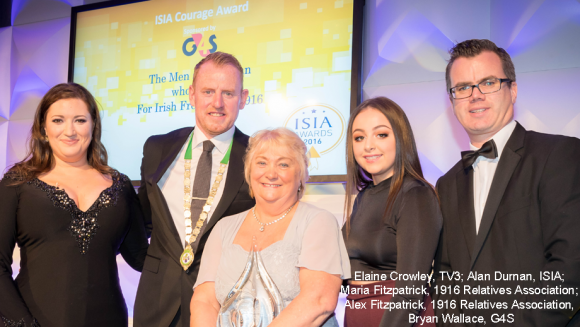 Security Officer of the Year

The award for Security Officer of the Year was presented to Michelle O’Connell, G4S.  Michelle was presented this award for the outstanding contribution she makes as a security officer at Cara Partners and for her commitment and dedication to the security industry.  There were also three merit award recipients on the night; Danny Clarke, NOONAN; Greg Hardy, Synergy Security Solutions and Rafal Muraszko, Synergy Security Solutions. 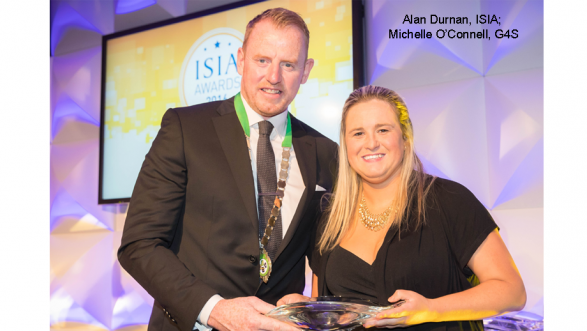 Security Supervisor of the Year

The award for Security Supervisor of the Year was presented to Abdallah Ahmed, Sodexo, for the outstanding work he does at Diageo St. James’s Gate, where he is responsible for supervising a team of security officers, making a significant contribution to the success of the site security.  There were four merit award recipients on the night; Wayne Culbert, Synergy Security Solutions; Marek Gapinski, G4S; Martin McAnaney, G4S and Denis McCarty, Synergy Security Solutions. 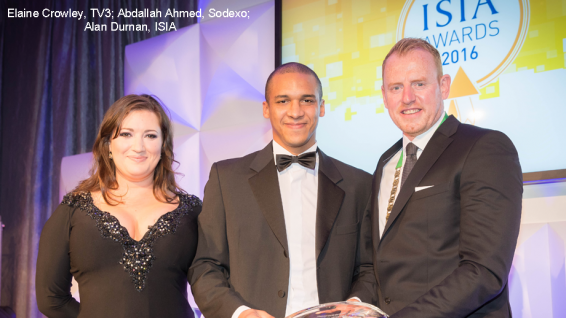 Event Security Person of the Year

The winner of the Event Security Person of the Year award was Thomas McGilvory, Pulse Security Management, who was specifically nominated for the work he carries out at Aviva Stadium and other contracts including The Marker Hotel and Disney Films.  There were also two merit award recipients on the night; Anthony Meehan, Synergy Security Solutions and Mick Smyth, NOONAN.  This award was sponsored by RSP and Hytera. 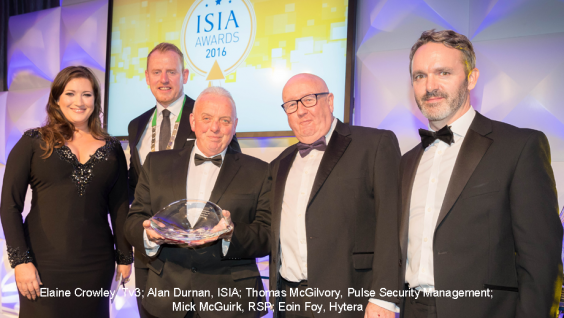 Electronic Security Technician of the Year

The award for Electronic Security Technician of the Year was sponsored by CONXTD and was presented to Charles Stolle of MTS Security who works with a wide variety of MTS Security clients in the Munster region.  There were two merit award recipients on the night; Henry Reidy, NOONAN and Gary Savage, MTS Security.

Electronic Security Supervisor of the Year

The award for Electronic Security Supervisor of the Year was presented to Cronan Byrne, NOONAN who is responsible for technical security with both Intel Ireland and as Tech Support Lead for all western EMEA Intel Sites.  A Merit Award was also presented to Daniel Brenzak of MTS Security. 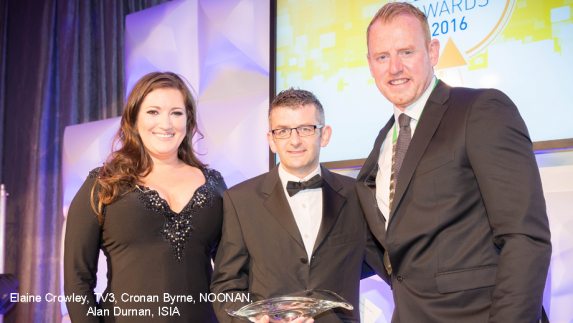 In addition to the standard award categories presented each year, this year the ISIA’s leadership chose to recognise the contribution of one of the association’s past Presidents.  Ray Guinan served as Chairman of the Electronic Division of the ISIA and was then elected as President of the ISIA in 2002 and served his term until 2004.  He played an extremely active role at a significant time in the industries history leading to the publication of the Private Security Services Act 2004.  He was also the first employer representative nominated to the Board of the PSA by the Minister for Justice in 2004 and he served on the board of the PSA until 2008 where he made significant contributions to the industry.  The ISIA recognised these significant industry contributions by Ray by bestowing the title of honorary life member to him. 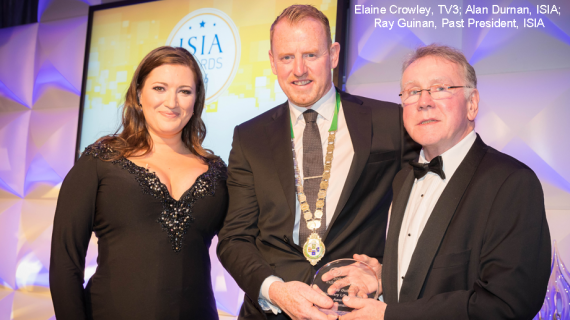 M1 Document Solutions and MTS Security were this year’s finalist for Innovation in Security.  The award for innovation in security, introduced in 2011, was developed to foster and encourage innovation in the security industry.  The award was sponsored by Axis Communications and the winner was MTS Security for the innovative approach taken in collaboration with Topaz Energy.  By maximising the way security technology is used, this collaboration has resulted in a variety of measurable improvements in health and safety, loss prevention, personnel and asset protection. 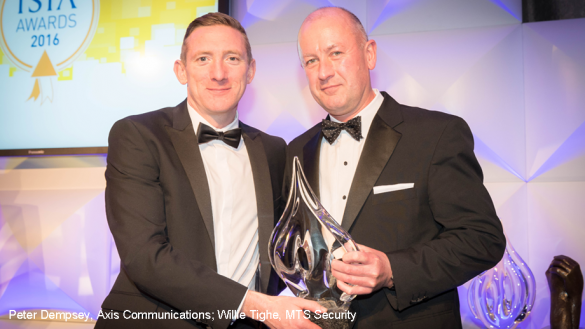 ISIA Locksmith of the Year

A customer’s choice award, clients of ISIA members were invited to complete a survey and provide feedback on their locksmith of choice.  Survey respondents were asked to rate their locksmith in terms of criteria such as customer service, quality of work and technical knowledge.  There were three finalists; Crothers Security, J. Williams Ltd. and Locksmiths.ie.  The overall winner of this year’s award was Crothers Security. 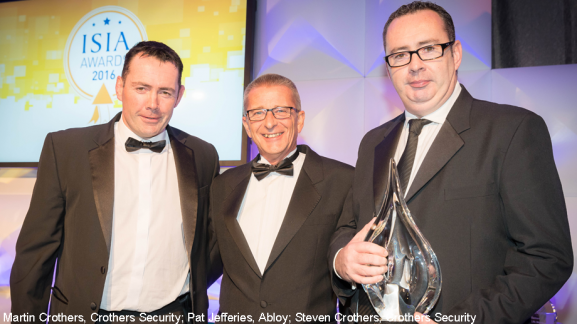 “With security being such a crucial piece of organisations’ risk management, it is so important that we recognise the people who ensure those risks are minimised,” said Sarah O’Donnell, communications director, ISIA. “The ISIA awards are an ideal vehicle for that, and for key players in the industry to come together, network and acclaim those who contribute to their success,” she said. 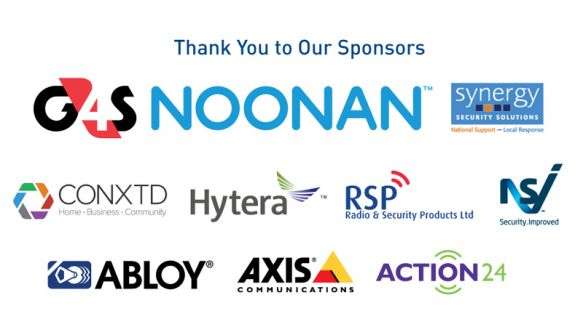