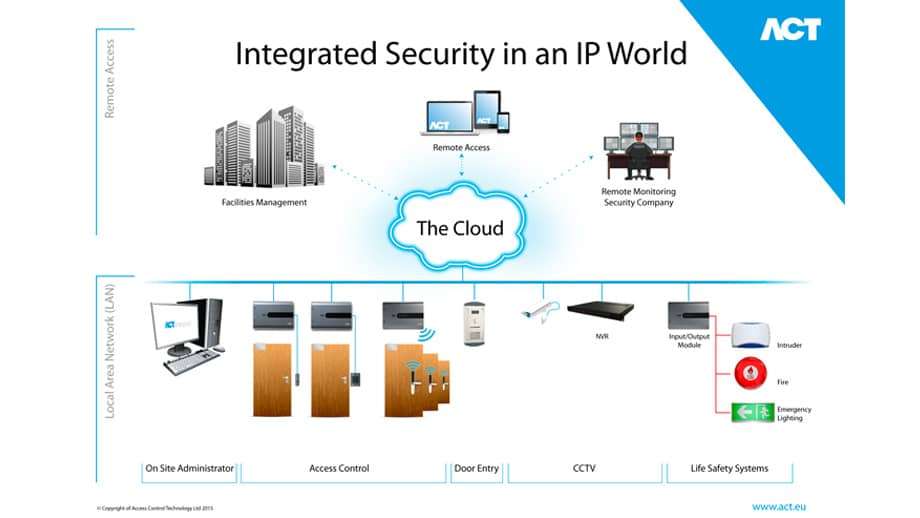 Why specify an integrated security system?

The advantages of integrated security

Integration in the world of security systems while still fairly new is fast gaining momentum. In the past security systems operated independently of each other. CCTV used co-axial cable, alarm systems used 6 core alarm cable, fire alarms used solid, shielded 24 V cable and access control in more recent times use IP networks, all with their own protocols. In addition, every system was specified and installed by a different person. Architects choose locks. Security consultants choose electronic access controls and monitoring devices. The fire engineer chose the alarm and evacuation system. However, the same technologies that drove the creation of computer networks and the internet are now being utilized to create integrated security systems with high levels of intelligence, sophistication and speed.

The Internet protocol (IP) revolution has allowed development engineers to put more layers of information on the same platform which means more scope for collaboration between systems that were previously incompatible. Prior to this a separate platform was needed for each technology. Today’s BMS products are allowing bilateral exchanges of information that capture multiple events across a common network with one single point of control.

A door held ajar at a major site at the same time that a change of temperature occurs may be a mere coincidence but an integrated system now has the ability to flag up twin occurrences to security operators in case they indicate a break-in.

Every aspect of our lives is now image-driven and it is common for access control management systems to have pictures of the user database. At the most elementary level, it’s hardly a brainwave to have a VMS activate a PTZ camera (or begin recording at a higher resolution) when an unusual event occurs such as a user making multiple unsuccessful attempts to identify themselves to a door. An alert can appear on an operative’s screen, and the briefest visual inspection and comparison of images will establish if a bona fide employee is experiencing difficulties or an attempted intrusion is taking place.

Integration of VMS and access control provides multi-tiered protection for buildings against intruders who may be disaffected former employees trying to use old pin codes and cards. The user can immediately isolate a relevant video clip, analyse it and export it for evidential purposes. But equally, having been alerted to an unusual event, users of the VMS frequently realise that the alert is being caused by a legitimate member of staff who can be allowed access or given instructions from a PA system.

The same principles of hierarchical ‘rights’ and time zones used in access control can be used in the VMS. Thus, in an extreme case such as an unexpected door activation at a plant room or server room out of hours, access control can integrate with VMS to begin high-resolution recording by every camera in the area and prompt guards to review the footage by creating a screen pop-up. This is truly bi-directional communication.

We don’t need to be lectured on the Internet of Things (IoT), listen to webinars on ‘big data’ or sit through seminars at trade shows on PSIM to realise that a door controller and an IP camera, while seemingly disparate devices, are now no more than addresses on a network. It’s not a quantum leap to realise that clients get better return on investment due to reduced training costs through the use of one common GUI.

What about Fire and Emergency Lighting?

Fire systems and emergency lighting are life-saving products. Emergency lighting is an essential service that is quite often forgotten until an accident or catastrophe-happens. In the past an emergency was usually due to a fire, today the threats can be far more sinister and this highlights the need for emergency lighting and evacuation procedures to be clearly defined and regularly conducted.

Usually, people only have minutes to escape not hours. Emergency lighting provides the illumination that enables people to see clearly, to avoid obstacles and to be able to move faster and more confidently to the nearest exit and to safety in a crisis. The emergency lighting system can be fully integrated with all of the other security systems installed to ensure adequate lighting in the event of an emergency.

Fire detection is one of the most challenging issues facing business on a daily basis, and improving fire and life safety monitoring and management while reducing costs requires new ways of working.

The choice lies between a fire and life safety solution that is standalone, or one that can be integrated with your other building management systems — including security, HVAC and access systems. In the latter case you get a single view, scalable platform, that provides better monitoring and control of your facility, while protecting your investments and helping reduce costs. APIs and SDks are available now from most established companies that allow full integration of these systems.

Interoperability means that systems will no longer plague operators with vague alert situations that may be no more than a localised voltage problem. Convergence allows technologies to serve the user better rather than having operatives respond to imprecise alarms.

Software analytics which is now becoming a standard in VMS systems has the agility to discriminate between possible threats before presenting clients with real-time visibility and a call to action. Full VMS analytics with resolution control, Pan,Tilt & Zoom (PTZ)  and exporting functionality of evidential clips is now available from tablets or smartphones via a web browser.

In addition, by using a common IP-based IT infrastructure, integration of security solutions with facility and building management systems leads to an increasingly intelligent, efficient, and cost-effective facility. With an intelligent integrated security management solution in place, executives can rest assured that their facility is well equipped with the fundamental tools to protect their premises and keep their staff safe

To learn more on how to integrate a security system using the latest hardware within the latest fire and security regulations register free to attend the half day CPD approved seminar at Engineers Ireland, 22 Clyde Road, Ballsbridge, Dublin 4 on September 10th 2015.

Click here for more information on the agenda and speakers…